Transitional Space: The In-between of Identity, Culture and Community

Can people do better?

I have written before about what I have come to believe is a root problem undermining all our attempts to create better lives and better conditions for all who share living on our finite planet. We need Monetary Reform, a change in the way money is created and put into circulation in our economies. [This is a man-made construct, not a natural law; history shows many precedents regarding different methods of money creation.] Recently I heard/read a brilliant podcast on the same theme. I hope you who read this will also listen. The definition of usury, earning interest on something that did not previously exist, is there. Also there is a distinction between causative injustices and derivative injustices. If the monetary system is indeed a causative injustice, from which so many other injustices derive, and if we consider how it was brought into being, we can see that well-meaning people as well as psychopathic greedy people [each of us capable of being both] sleepwalked into the creation of this dangerous destructive system that feeds derivative problems the world over. [It’s a systemic problem, we are part of it, that is why we often feel so helpless.]

We need a different image, an easily imaginable mind map of how a different money system would work. The first essential, that is indeed well on the way in many parts of the world, is that we stop giving precedence to purely rational thinking, AS IF by reasoning we could encompass ALL the elements that made up a causative story line. We can’t. See modern neuroscience, or less modern maths logic, like Godel’s theorem, and recognize that any thinking will either be circular or move outside its initial bounds*.

Enter: UNCERTAINTY, we really do not know the future, but duh, we don’t know past nor present either. Language, and its mind-mate reasoning, does not capture all. Perception is not only limited, it can be false.

Enter: EMOTION, the biological response that tells us the state we are in, filtered and nuanced through nature, nurture, memory and experience to become a present feeling.

Enter: INSTINCT, the impulse to act, to be an agent in our living.

Because these enter and affect our experience in our body knowledge, before our higher cognitive capacity gets going, thinking includes them.

ENTER: we no longer feel helpless, we can act, in humble and ordinary lives, each of us may be as a drop in the ocean, or a butterfly wing tossed in the wind, but, we become part of the change. We can each make a new Money Mind Map for ourselves and share that, as widely as possible, making connections, adapting and changing as we live it out. 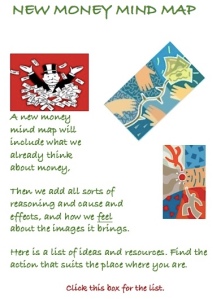 HOW will I act? I cannot push your action in any direction, but I can write these posts.

As well as writing posts, I am looking more closely at where and how usury enters our lives, my life.

I have come to believe that the Monetary System where banks create money through credit/debt came into being because usury was ignored. This is, as always, about money creation, NOT about money lending, as lending means that the something lent already existed.

I can’t do much about the price of my coffee, and the amount of that price that is interest in the usurious system. I can move away from some kinds of  “money” making, like share dealing. [As my income is relatively small, this is easy, I do not have spare money with which to deal.] The best I can do seems to be to support activities that are based on commons principles, or cooperative endeavours. Especially I can support community actions that do not involve money at all, see for example the “101 things to do“.

And, I write to my representatives, both local and national. Apparently they do heed what constituents say, if they hear it often enough from enough of us.

*We know that psychologically complex holistic thought that includes all, is difficult if not impossible. In fact, the good old Enlightenment [male] understandings, let us mistakenly believe that reason was the most powerful element in our mental armoury. OOPs – neuroscience and experiential psychologies and lots of non-western and feminist thinking now puts reason in its more realistic non-hubristic  place, an outcome of emotion and experience enabled by test and connection with the whole world out there. Wilfred Bion called this thinking  process an “intersection with truth“.

I find that this truthful thoughtfulness (in which one is active, an agent) has many names, call it what you will:
be mindful; meditate; use systems thinking, situated knowledge, reflexivity, ecological thought; heed heuristic as well as evidence based science; use critical friends, the examined self, connect with others; be open to change, hear and bear criticism, use  self.

One thought on “Usury, and becoming an activist.”

Almost everything here is a work in progress, without much attempt to order the thinking.
Do not expect it to make sense. I am passionate about Human Rights. I use psychodynamic ideas, and free associations to other stuff like David Bohm’s wholeness and implicate order, which probably no-one, not even me, can follow. My hope is that something worth having will now and again appear from the chaos. Something practical would be good. Read more about why I write here or see biography.

Where does the thinking begin:

D.W.Winnicott insisted that transitional space, the space of the non-rational, neither rational nor unconscious and irrational, is the location of culture and identity. Also called in-between space, one important understanding arrives when the question ‘is this real?’ is not asked. The posts and pages on this blog will return to this idea, and notice what happens if the question is asked, or , if one person should insist to another that their understanding is paramount. This is just one of what I am calling "Big ideas". See the about page for info about me and what I have been as a professional person/ordinary worker - a life from which I have now retired. My family has been the main influence in turning me into a traveller, but my work was founded for 40 years (help!) in psychodynamic understanding of people and their work, their roles and relationships. That sounds theoretical and grand, in practice it is ordinary. We all have emotional life, we all have more-or-less good-or-bad ways of understanding what happens to us. Try other topics in the menu above or the links below.

My World, Your World, One World this is a cross between journal and diary, just what I have been doing or thinking.

Poetry of Moods and Moments, sometimes, prompted by something, anything, I write poetry

Emotional Education There is so much known about our minds, it is crazy how little attention we pay to the ways we think. This site is “beginnings” a part of my work history, a record of a site created in 1997.